Chikankari - Threading the Past with Present 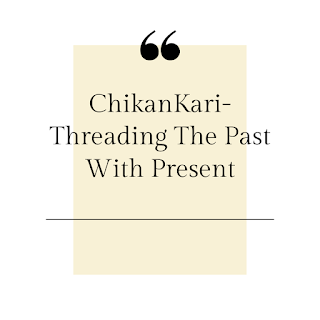 Vibrant yet subtle, contemporary yet traditional, Chikankari has a unique style that every Indian loves. Chikan work is not new to India and perhaps it never was. Dating back to the 18th century, this Indian embroidery is here to stay for many more decades to come. Fascinated by its exquisite designs, Chikankari has conquered the minds of many fashion designers across the world and is a rage amongst foreign consumers thus presenting Indian embroidery on a global platform.

From time and ages, people like Christion Dior to Fendi have appreciated the craftsmanship and knowledge of the thread work in India. And in this list of enticing thread work, Chikan Kari is counted amongst the top five players.

The Continued Legacy.................
Do you remember the last time you have worn a Chikan Kurta, No!!! how would you? since you have no idea that the piece you own is actually a part of history. Stunned!!

It was Noor Jahan who turned Chikankari into a high fashion statement. Those were the days, when it was considered De Rigeuer for the ladies of the court to dress in Chikankari.

As history unfurls, we came to know that the endearing embroidery came into shape in the 18th century during the era when Nawab of Awadh ruled the state. It was that time when a spectrum of stitches and motifs were evolved and that outrageously covered safas, chogas, and Angrakhas of the noblemen and women. The stitches used then were simple.

Complicating the craft……………..
As the craft matured, more stitches came into the market creating a demand for the thread work. Today, we have Tepchi , Bakhiya, Hool , Zanzeera, Rahet , Banarasi , Phanda and Murri ,Turpai and Darzdari .

Be it of any style or stitch, donning a simple chickan piece might just enhance your persona hundred times. Though best in summers, Chikan work can be worn any time and with its versatility ...anywhere.

Basically done on cotton fabric, the designs or the motifs used, appreciate the royalty of Mughal architecture. Originated from Lucknow, the Chikankari have evolved and has created a niche for itself in the fashion world.

The awe-inspiring Chikan work has influenced designers like Ritu Kumar, Manish Malhotra , Sandeep Khosla, to pro generate some marvelous pieces for our garment industry. So what are you waiting for? Flaunt a chickan piece and have a style of your own..........

Not far from the regional cuisine, street food is a vital part of the culinary experience in India. They are the essence of our culture, with age-old legacies. Known for their taste and variety, the street food of India is the most loved & delightful memorabilia to take back from an Indian trip. Just like Cricket, food is also a religion in India, where street food dominates the mind of the Indians. Requesting you to add street food on your trip to India and unfurl a gastronomical adventure to reminisce. 1)   Panipuri  (Pronunciation in English: pa·ni·pu.ri) Photo by  Amresh Gupta   from   Pexels Panipuri of the most popular street foods found all over India. It has different names in different states, as in Uttar Pradesh, this snack is known as Golgappa, West Bengal it is called the Puchka and in Central India, it’s called Gup Chup , etc. Panipuri consists of pure, a deep-fat fried bread made from unleavened whole-wheat flour, mixed with chickpeas, onions, potatoes, chutney, chutn