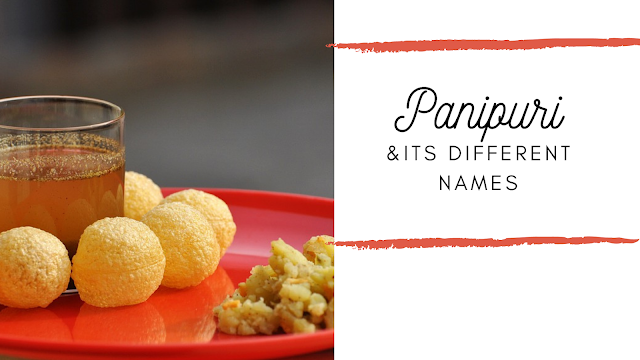 Panipuri is just not a snack, it is a celebration in India. Whether you are happy or having temperamental issues, these round balls of Maida will always enlighten your mood. Right from birthday parties to marriages, they are an integral part of the Indian menu card. There are more than 10 varieties of pani Puri in India.

Every nook and corner of Indian streets will have that one favorite panipuri “wala” with a crowd around him.

Popular in India, just like its taste, it is called by different names in different states of India.

Starting with Panipuri itself. It is called Panipuri in following states Maharashtra, Gujarat, Madhya Pradesh, Karnataka, Tamil Nadu and Nepal. You will observe different fillings in different states, example in Mumbai it may be filled with ragda – the white mashed beans while in Gujurat it is filled with potato slices, some dates, boiled moong. Addition of chutney in Panipuri is on demand, whether you like it sweet, spicy or both.

Panipuri is also known Golgappe (prn: Gol-Gap-Pe) in New Delhi, Punjab, Jammu & Kashmir, Haryana, Bihar, Madhya Pradesh and Himachal Pradesh in India and almost everywhere in Pakistan. Gol Gappe are made from a mixture of potato, chickpea, and offcourse variety of chutney. In Northern India, you can have Golgappa’s in wheat or Maida.

GupChup is another name of Panipuri, in parts of Odisha, Hyderabad and South Jharkhand. The gup chups are lighter ones in comparison to others, as they don't have a lot of stuffing in the puris. You discover the gol gappe with squashed chickpeas as the stuffing alongside zesty and tangy pani. You can have this alongside onions.

Puchkas are a slight deviation from the customary pani puri style. The puris are loaded down with mashed potato and gram - that is dunked into spicy water and served. Panipuri is called Puchkas in Bihar, Assam, Bangladesh, Jharkhand and West Bengal. Here it is essentially made of White flour.

Pani Puri is also known as Padaka in Aligarh, UP.

As called in Uttar Pradesh, Central India and Rajasthan. The filling is majorly of potato.

Panipuri is referred as Phulki in Uttar Pradesh, Gujarat and Nepal.

Not far from the regional cuisine, street food is a vital part of the culinary experience in India. They are the essence of our culture, with age-old legacies. Known for their taste and variety, the street food of India is the most loved & delightful memorabilia to take back from an Indian trip. Just like Cricket, food is also a religion in India, where street food dominates the mind of the Indians. Requesting you to add street food on your trip to India and unfurl a gastronomical adventure to reminisce. 1)   Panipuri  (Pronunciation in English: pa·ni·pu.ri) Photo by  Amresh Gupta   from   Pexels Panipuri of the most popular street foods found all over India. It has different names in different states, as in Uttar Pradesh, this snack is known as Golgappa, West Bengal it is called the Puchka and in Central India, it’s called Gup Chup , etc. Panipuri consists of pure, a deep-fat fried bread made from unleavened whole-wheat flour, mixed with chickpeas, onions, potatoes, chutney, chutn